I broke away from work on this weekday just long enough to take my bicycle out for the first ride of the season on the Nashua River Rail Trail .

I like the mural in Groton, in the underpass crossing Route 111. I think local students must have painted it. It’s a map not of local streets, but of the Boston and Maine rail lines, including the decommissioned one that now serves as a trail. Nice bit of history, paying respect to the trail.

A beaver resisted all my attempts to photograph it. I almost missed it, in a swampy area alongside the trail: only concentric ripples gave it away. It’s good to see the wetlands looking like wetlands again, as gentle spring rains heal the effects of last year’s serious drought. Last September I had no more chance of seeing a beaver at trailside than of seeing a pod of whales.

The NRRT was dedicated fifteen years ago, and the road crossing at Route 113 in Pepperell has always required extra caution, from motorists as well as bicyclists. The ice cream shop across the street is one compensation. So is the pocket-sized park that’s been developed just south of 113. The shrubs are in bloom. Benches and markers have been spruced up. Something new – at least to me – is an air pump anchored in place, ready to tend to a summer’s worth of flat bicycle tires. That’s being neighborly.

A little history to go with my stop along the trail.

The river that gave the trail its name is not visible from the trail, except for a lovely mile-long stretch in Pepperell and Groton. Every time I see it, I think of the guidebook I received when I moved to New Hampshire more than thirty years ago, which had this to say about the Nashua River in Pepperell, where there’s a dam:

…but for the dirty water this would be a fine smoothwater trip. From [Groton] to East Pepperell, the river is not attractive, as the increase in water level has flooded swampland and killed the trees. [AMC River Guide Volume 2, Appalachian Mountain Club, 1978]

By 2002, the Guide’s third edition told a different story.

The Nashua River has enjoyed a major restoration in the last 25 years. The industrial pollution is gone now. Birds, wildlife, and fish are returning, and paddling the Nashua River is now an enjoyable experience.

Walking and biking alongside the river is pretty enjoyable, too. 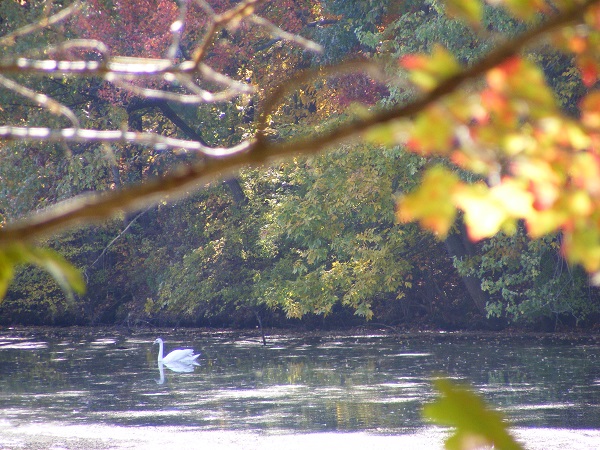 Saturday, and another nine miles on a very familiar path. I’m reminded again that I’m no photographer, especially when my camera is an afterthought on a mobile device. My pictures are generic New Hampshire foliage shots – but each one is of a spot I’ve seen in all seasons for more than a decade now, on unhurried walks like this one.

When the Nashua River Rail Trail opened in 2002, an osprey nest was visible from the bridge over Unkety Brook. I look for it every year. It has taken a beating, and after one storm – was it the Halloween snowstorm of 2011? – it looked destroyed. Two springs later, the osprey were back.

There’s a farm field bordering Unkety Brook on the north side. Nothing but corn stubble remains from this year’s crop, visible as the whitish ground cover in the center left of the photo above. Most years, I see butternut squash or pumpkins in that field, but this time it was corn. We had a very dry summer, and Unkety looked low in July and August. The water level looks better heading into fall.

The glaring sun reminded me all afternoon that it would have been a good idea to wear a visor. No doubt that it’s autumn, though: the sun was much lower than at the same hour even a month ago, and it was fleece-pullover weather. The leaves on the trees edging the trail, as opposed to the trees along the nearby river and brooks, haven’t even begun to turn.

I have an AMC River Guide from 1978, more useful at this point for history than for navigation. About the Nashua River in Pepperell, the writers fretted: “From [Groton] to East Pepperell, the river is not attractive, as the increase in water level has flooded swampland and killed the trees.” Much has changed in 30-plus years, and the area upstream from the modest little dam in Pepperell is now in my opinion the loveliest part of the river.

Certain ceremonies must be observed: Columbus Day weekend marks season’s end for the ice cream stand in Pepperell near the rail trail, and I observed the occasion with a small-not-small dish of Moosetracks. No photo. Trust me – it was splendid.

I was surprised to find that the ice cream stand near the trail in Pepperell is open! The young man at the window told me it’s their first day of the season.

The trail between the NH/MA state line and MA113 is in good shape. Trail maintainers have cut & cleared all the trees damaged over the winter. It’s too early for wildflowers yet along the trail, but it’s a good time for birdwatching since the hardwoods haven’t leafed out yet. The Dunstable Coke machine is in action for the first time this spring. (If you ever walk the Nashua River Rail Trail between the state line and Pepperell, you’ll know what I’m talking about.) I picked a good day for my first 2013 trip to the trail.

The parking lot in Nashua at Gilson Road, the southern end of the rail trail, is open. It had been chained off as recently as a couple of weeks ago.

Watch out for a pair of Canada geese scouting out the ponds near the Dunstable-Pepperell line. I had to back off briefly when one stood in the middle of the trail & hissed at me. The pair moved away eventually.

Back to the Nashua River Rail Trail today. This is still one of my favorite places, in all seasons. After a dry winter & early spring, recent rains have brought out the wildflowers along the trail, including the columbine pictured below that will be gone by my next visit. Today’s walk was from Gilson Road in Nashua to Rt. 113 in Pepperell.

I'm a New Hampshire hiker and freelance writer who's happy to leave the White Mountains to the peakbaggers. Let me tell you about southern New Hampshire's oft-overlooked gems including urban parks and rail trails. I love my Granite State.